« Welcome to Our Hillbrow »

When Phaswane Mpe came to Frankfurt am Main at the invitation of the Africa Alive Festival in January 2002, he was 32 years old, a young man with big brown eyes and an open hearty look.

Only a year before, in 2001, his first novel Welcome to Our Hillbrow was published. At our festival he did a reading of his new book and participated in a panel discussion.

Mpe came from South Africa, a country where more than ten years of age ago the African National Congress (ANC) had officially forced the end of apartheid, but for many black South Africans a new, just, democratic society still seems to be far away. I had come from the former GDR and had been
living in Frankfurt am Main for four years. We had one thing in common: we had both experienced huge periods of upheaval in the 1990s.

We sat in the kitchen with hot food and tea and had a long conversation, it was the 30th of January 2002. I recorded parts of our conversation.

I got to know Phaswane Mpe as a humble and serious person. He captivated me with his analytical and differentiating view, his timid smile.

Our conversation revolved around the parallelisms of the situation after the end of apartheid and the collapse of the socialist system, as well as the question of shaping a new democratic world order after the end of the Cold War and the bipolar world order. What experience could Africa bring into this process, especially South Africa with its experience from the Truth and Reconciliation Committee? How should this new dialogue be conducted?
Phaswane Mpe: „A new dialogue it certainly necessary. But it is tricky who to be involved in that new dialogue and what role they are going to play. If the UN is to aid as a mediator that will help. Our experience of South Africa is that if political groups are fighting you need someone, who does not belong to one of those groups to mediate, otherwise one group does try to use its influence against the other. The UN would have a strong role to play. However, there is a problem. Every time UN has called for restrain in a conflict, U.S. has blatantly said: no, we are not interested, we deal on our one.“

Mpe was a very attentive listener. He faced all my questions, chose his words carefully and did not gloss over anything when he answered. His incredible interest in political and social issues and in social commitment was to radically change his life, even if only for a short time. But I was to find that out later.

Phaswane Mpe was born in 1970 in the Northern province of South Africa, in the town of Polokwane. He grew up there, his mother tongue is Sepedi. In 1989, a year before the release of Nelson Mandela, he moved to Johannesburg to study African literature at the University of Witwatersrand, which had only recently begun admitting black male and female students. 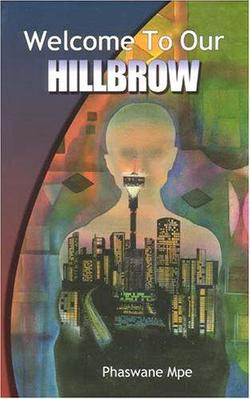 Looking for a cheap place to live as a student, he moved to Hillbrow, a central neighborhood of Johannesburg. In its high-rise buildings lived many migrants, of African and, also, Eastern European origin, in addition to students, single mothers and mixed couples (who here evaded the law that prohibited interracial sex). A neighborhood that is a legend because it was the first neighborhood in Johannesburg where black Africans could live alongside white Africans.

His novel Welcome to Our Hillbrow set exactly in this period, is about all these raptures and changes that took place in the new South African reality of the 1990s, especially in the cities, in the first decade after apartheid: the search for identity by black South Africans after the collapse of „racial segregation,“ complicated by heavy migration from neighboring countries. Quite a few of the migrants had better education.

Phaswane Mpe was part of the generation that had struggled through apartheid despite harsh hardships and oppression. But instead of enjoying long-awaited freedom and equality, most people of his generation were confronted with new social and economic problems: the grow of unemployment and massive poverty accompanied by crime, drugs, and HIV/AIDS.

This previously unknown disease hit South Africa particularly hard. Comparable to the current Corona pandemic, it spread fear and increased the non-appreciation of immigrants. At that time, migrants in South Africa were not only held responsible for social problems, but above all for the cause and spread of this disease. Countless people fell ill and died from it.

What is remarkable about this novel, which is one of the first to come from the pen of a black South African author after the end of apartheid, is that the protagonists are ordinary young black South Africans who moved to Hillbrow from the rural areas. It is a story written in retrospect, of a young man who moves to the city of Johannesburg into Hillbrow to live there and to study at the university. He falls in love, is deceived, cheats; crimes happen, and he commits suicide. It is the story of a person, of Refentše, and at the same time the story of many of Us, of Our Hillbrow – „Welcome to Our Hillbrow“. The book is written in English, but the South African language Sepedi has a special meaning here: the name of the already deceased, but still dominant hero Refentše means in Sepedi: „we have conquered“. The name of the two women who play an important role in Refentše life are translated from Sepedi as Lerato – love, and Refilwe – gift. The novel has a unique pace and humor.

What is special about this novel is that it is a harsh critique of the prevailing views of what was considered politically correct in 1990s South Africa.

It is a sharp critique of the growing xenophobia, the rejection of migrants, the Makwerekwere – who see South Africa as a substitute paradise because living conditions were often much worse in other states in Africa.

Before writing this novel, Mpe told me, he had written short stories and poems, but only a few have been published.

How did you get the idea to write the novel as a sequence of short stories? – I asked him.

“I had written a collection of short stories in 1997 which I had translated into Seped, but I realized that there were certain things that I have not said enough about. And so I committed myself to write more about those things. As a result, I wrote a collection of poems in 1998. Then I discovered that I actually, still had said not enough (…) And there was this day in Mai 1999. I was sitting in my office trying to write an academic paper, but the ideas were not flowing. I was very depressed, and I just phoned a friend and I told him I was going to commit suicide. And he said to me: Well, I don`t know whether it is a good idea or not, but if you have decided to do it don`t deny me to have this opportunity to have our last beer. So, I waited for our opportunity to have our last beer and while I was thinking about those kind of thing, I realized, that what he said was a very good sign. And I should listen to that sign. Instead of committing suicide I decided I overlook myself and I overlooked myself on that certain day from just before 9 in the morning for just over 18 hours. By the time I left my office a have done not just a short story, but I have done almost three-quarters of “Welcome to Our Hillbrow” and I spend the next 5 weeks writing the rest of Welcome to Our Hillbrow. That is how the novel came about. There was no sketch, nothing. But I took some of the characters from the collection of short stories I had written before.”

This book, which Phaswane Mpe wrote in 1999 in this impressively short time, was published in 2001 and made Phaswane, who was only 30 years old, famous overnight. He was celebrated in the South Africa’s media as a new young voice who would usher in a new era in South African literature. Honest and unsparing, he looked at his reality.

Before writing this novel, he did a publishing diploma at Oxford Brookes University and a Master`s degree in African Literature at the University of Witwatersrand and had spent already several years teaching African literature at the University of Witwatersrand. He was among the
first black intellectuals who took up positions at the university and in other civic and political institutions to play an active role in shaping the democratic process.

In addition to that, he regularly published articles in newspapers about literature, culture and politics and often participated as a jury member in literary competitions.

Mpe was very committed. He kept, he told me, close contact with his students at the university, had open discussions with them about current political and social discourses.

I ask him if he considers it as his job as a writer to intervene in social processes. Wouldn’t it then be more interesting, perhaps even more influential to be a political commentator or an analyst, to participate more in the democratic transformation process in South Africa?

Phaswane Mpe: „If I were to work as a political commentator, it only has to do with politics, it narrows down. As a writer who writes novels, poems, or short stories, I can write not only about political matters, but about many other things, like love and other things.“

We said goodbye to each other with a warm hug. I was impressed by his energy and his many activities. He was not a loud man, did not tried to be the focus, although he had so much to say. I was sure to hear more news from him soon.

Only later did I learn that Phaswane Mpe had abandoned his doctoral studies, which he had begun in 2003. I learned that he had suffered from sporadic bouts of illness and nightmares, the cause of which doctors could not find out.

Mpe consulted traditional healers and began studying South African traditional healing. It was the time of the rapid spread of HIV and AIDS in South Africa, thousands of young people, including children were dying. Neither modern European nor any other medicine had yet found a cure for this terrible disease.

Perhaps he hoped to give concrete support to his students and his country in this painful situation? Perhaps that is why he devoted himself to the study of traditional African concepts of belief, the knowledge of how man, nature and illness are linked, and the importance and power of the ancestors, and that of African herbalism?

I still see him today as he was then: a very warm-hearted, honest, and incredibly inspiring person who was swept away by the political and social maelstrom of the tremendous upheavals of the
first post-apartheid decade.

He died young like his hero, much too young!

Postscript
Phaswane Mpe: Brooding Clouds, a collection of his short stories, was published after his death in 2008.
One of his short texts was published in the anthology TWENTY IN 20.
The Best Short Stories Of South Africa`s 20 Years Of Democracy, 2014.

Interesting articles on Phaswane Mpe can be found in:
The Past Coming to Roost in the Present
Historicising History in Four Post-Apartheid South African Novels, 2007
and themantle.com/literature/welcome-our-world